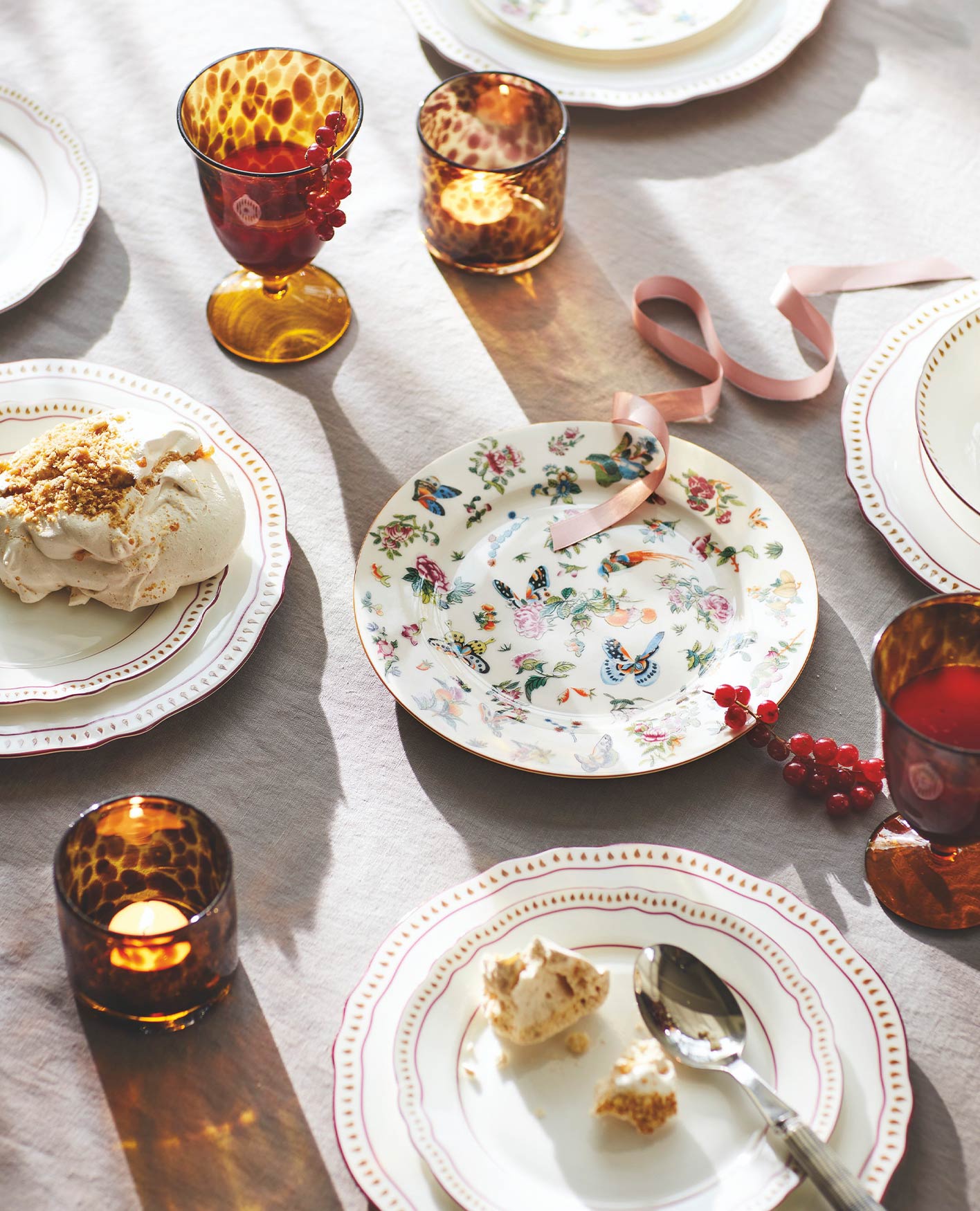 Celebrated American fashion designer, Adam Lippes, began his career at Ralph Lauren before moving to Oscar de la Renta, where he soon became one of the youngest global creative directors at a luxury fashion house. Since 2004, the designer’s eponymous label has created clothes with easy elegance at their core, drawing on American sportswear and Lippes’ passion for architecture and English interiors.

Now Lippes has joined forces with OKA Co-Founder and Creative Director, Sue Jones, to design a collection of tableware, inspired by Chinese export patterns. Aimee Farrell sat down with the duo to get the inside story of how the collaboration came to life.

Adam Lippes divides his time between Brooklyn and Massachusetts, where he lives with his three labradoodles Lola, Bidu and Kiko.

The designer’s fashion collections draw on American sportswear and his love of  architecture and English interiors.

“My heart lives in England,” says Lippes. As evidenced in his exuberant Brooklyn apartment and 100-acre estate near Monterey, Massachusetts, Lippes has had a lifelong love of English style. “I don’t know where it comes from, really, but it started with English interiors – from Chatsworth to [the Vogue photographer] Cecil Beaton’s Reddish House. These houses flow so beautifully; they’re the perfect mix of grandness and casualness.”

The same balance can be found in the clothing collections Lippes designs and throughout his homes. “Adam is a keen collector with a very sophisticated eye – and he loves entertaining,” says OKA Co-Founder and Creative Director, Sue Jones, who proposed a project with Lippes after being introduced by a mutual friend. “He came to England and we got along straight away. There was great synergy right from the start.”

I’m very passionate about the mix – blending centuries and styles and giving everything a foundation in classicism. That’s how I live – and that’s how it is when you enter OKA’s stores.

Evolving over close to two years, the creative conversation between the pair began with a series of mood boards – a veritable menagerie of images of ceramic cockerels, boars and birds, monkeys and dragonflies; alongside fantastical Toile de Jouy fashion confections. For Sue, however, it was a series of pictures of Famille Rose plates – a classic Chinese export style which became fashionable in Europe during the late Baroque period – that stood out. “I knew immediately that was the way to go,” she says of the delicate ceramics that she has long avidly collected.

“I wanted to create a modern rendition of Chinese export patterns,” explains Lippes, who leafed through auction catalogues and surveyed the collection at the Met for source material. After he conjured the design in his New York studio, OKA charged an artist in Southern China with recreating the composition in watercolour on speciality rice paper. Then, the artwork was digitally rendered by OKA’s London studio, ready to apply to fine bone china.

We're delighted to partner with Adam to bring his debut tableware collection to life, which beautifully combines his passion for interiors with his love of colour and antique patterns.

This rich exchange resulted in a collection of dinnerware, glassware and linen meant to elevate entertaining and transform the table at home. The centrepiece of the collection is its two complementary “mix and match” patterns, inspired by antique Famille Rose porcelain and crafted from fine bone china by artisans in Jingdezhen, the birthplace of traditional Chinese porcelain. The range includes plates, bowls and teacups. Each piece has been carefully decorated with detailed, colourful designs including birds, butterflies and florals. Luxurious cotton placemats with ornate hemstitched borders and hand-embroidered napkins create the perfect canvas on which to display the china. Elegant crystal wine glasses complete the collection.

Much like Lippes’ playful runway creations, the final product effortlessly melds prettiness with practicality. “I’m a great believer in using what you have,” says the designer. Of the plates, bowls and cups, he says “they look as though they’re your grandmother’s finest inherited china, but they’ll go in the dishwasher. It is both special and everyday porcelain, intended to be mixed together in any manner to create a tablescape of colour, fun and refinement.”